All-in-all I think we can call 2013 a triumph for Nickle Electrical. We reached a major safety milestone, won two more Associated Builders and Contractors Excellence Awards, supported and participated in numerous community events, and were voted one of the Best Places to Work in Delaware Today magazine. After the Christmas hype settles, the New Year holiday is a time to reflect on the past – evaluating achievements, areas of improvement, highlights, and more. It’s also a time to consider expectations for the coming year and hold onto the hope that things will get even better. Management has been laying out an official business plan for 2014, but let’s take a moment to reminisce on 2013.

Two major milestones were achieved early in the year, breaking previous records. In February, Nickle employees worked three years without a lost-time accident and just a few weeks later, we reached one million man-hours without a lost-time accident. Over this time the company has taken many steps to improve the welfare of its employees. Safety has not only become a necessity on the job, but it’s now a part of our culture. Our employees are immersed in an environment that emphasizes the importance of sending everyone home unharmed at the end of the day. We put value in continued safety training, foremen and Safety Director Mike Anderson conduct weekly safety audits, we now have a Safety Committee with field employee involvement, and have instituted a Stretch & Flex Program to be completed at the beginning of every day. In April a company-wide celebration was held at Dover Downs that included a short presentation regarding the significance of being safe on the jobsite. As of today we have worked 1,428 days without an accident!

Because of Nickle’s commitment to these safety values, the company received numerous awards. In March we were selected as a recipient of the 2012 Governor’s Safety Award for the second year in a row. The honor was co-sponsored by the Delaware Contractors Association and the Department of Labor. In May, Nickle also received its eighth consecutive Associated Builders and Contractors Delaware STEP (Safety Training and Evaluation Process) Award, this year at the Platinum level. We also received our first Platinum STEP Award from the ABC Chesapeake Shores chapter in September. The STEP program is designed to support ABC members with development and improvement of safety and training efforts. 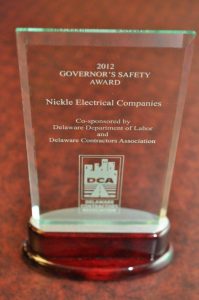 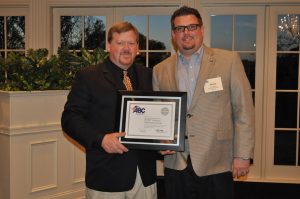 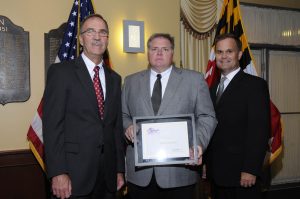 Nickle and its employees has always made an effort to be involved in the community. Our outreach extends across the entire state of Delaware and beyond, helping those in need and touching the lives of many when they need it the most. We’re proud to have sponsored and donated to more than two dozen projects, events, and organizations throughout 2013, and have a few already lined up for 2014. Below is a small sample of 2013’s events:

For the third year in a row, Nickle was a sponsor for the Milton Irish Eyes St. Patrick’s Day parade and Lucky Leprechaun 5k. The proceeds benefited the Milton Fire Department Training Program, Best Buddies Delaware, and Casa San Francisco. Our parade float promoted the value of building environmentally-sustainable projects. 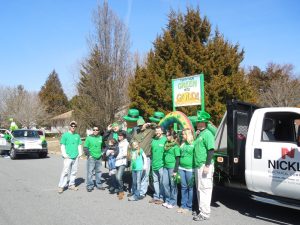 Since 2009, Nickle has been sponsoring the Sussex Family YMCA’s annual golf tournament that takes place every May. This year we were the exclusive title sponsor donating $4,000 to the organization’s Open Doors Program. The program supports families struggling with financial matters who wish to be active in the YMCA. 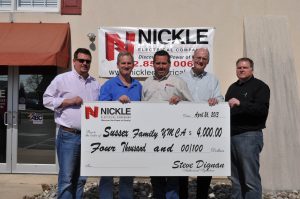 Since 2008, Nickle has been a sponsor for the Delaware Hospice annual 5k. Every July we provide a donation and multiple employees brave the stifling heat to run and walk more than three miles to show support. 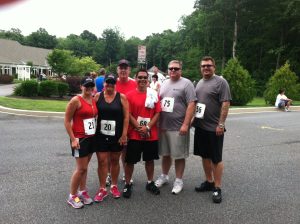 In September Nickle was a hole sponsor for the Joseph D’Amico Sr. Memorial Invitational Golf Tournament at Cavaliers Country Club. The event is for a scholarship fund that supports an exceptional Catholic high school student as well as an outstanding student at St. Patrick’s Elementary School in Kennett Square, PA. It also provides grants to charitable organizations that were supported by Joe during his lifetime.

To raise money that will provide scholarships to Delaware Technical & Community College students through the Alumni Board Scholarship Fund, Nickle sponsored the 6th Annual Alumni & Friends 5k Run/Walk. The event took place in October on the Wilmington Riverfront.

Also taking place in October was the 2nd Annual Run 4 the House 5k Run/Walk to benefit the Ronald McDonald House of Delaware. The organization offers affordable housing to families with seriously ill or injured children being treated at local hospitals.

Nickle sponsored one of Delaware’s most coveted events – the Apple Scrapple Festival. The mission of this 22nd annual event is to promote western Sussex County, actively involve all community organizations, and help elevate awareness of agriculture. The festival included events such as a scrapple carving contest, library carnival, car and craft shows, live music, and more.

This year marked the 1st Annual Easter Seals Walk With Me Delmarva event. Nickle was a sponsor and the proceeds of the event help the non-profit organization provide life-changing services to children and adults with disabilities. The event took place on the Baywood Greens Golf Course in Long Neck where participants walked the first nine holes of the course, totaling approximately three miles. 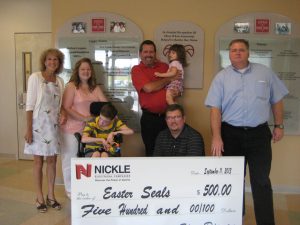 Nickle Foreman Ryan Kennedy and his wife Alicia participated in the 30th Annual Bike to the Bay event this fall to benefit research to cure multiple sclerosis. They chose the 75-mile ride through Southern Delaware, beginning in Dover and ending at Delaware Seashore State Park.

Just a few weeks ago, several employees rang in the holidays with the Salvation Army bell-ringing at Wal-Mart near Prices Corner. Nickle employees have been participating in this event for five years. The Salvation Army has been utilizing the famous red kettles since the late 19th century and they’re now recognizable around the globe. Donations provide holiday dinners, toys, and clothing to families in need. Volunteers also bring gifts to hospitals and nursing homes. In the United States alone, approximately 4.5 million people receive assistance during the holidays thank to the Salvation Army.

Some of the other organizations Nickle has supported throughout the year include United Way Delaware, Biggs Museum of American Art, Boys & Girls Club of Delaware, University of Delaware Athletic Fund, Christiana Fire Company, Hagley Museum and Library, and Sussex Technical High School.

One of Nickle’s 2013 goals was to focus on continuing education and training programs for both field employees and upper management. In June select employees participated in a hands-on pre-planning workshop to better understand the tactical process that goes into running a project smoothly from start to finish. This fall a handful of people at both our Newark and Georgetown locations attended a class devoted to conduit bending, led by Pre-Fab Manager John Zuvich and Mechanic Joe Habbart. Nickle employees also attended an all-day course dedicated to Blueprint Reading, hosted by ABC. Nickle also provided multiple Arc Flash Safety Training classes in October. These types of classes educate employees on the dangers of performing hot work on or near energized equipment. Our Vice President of Pre-Construction Dave Spittle attended the Lean Construction Institute’s annual conference in Dallas, TX. Lean construction is a project method that involves collaboration between the owner, architect, engineers, general contractor, and major subtrades. This teamwork results in lower cost, shorter schedule, and fewer change orders with an overall goal of eliminating waste and rework. Chief Estimator Mark Benson and Project Manager Brandon Cale also attended a conference in Illinois to learn the ins and outs of lightning protection, a major portion of many of our projects. 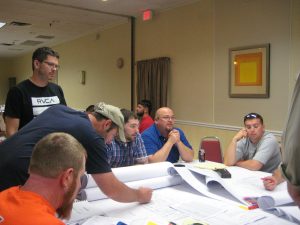 There’s recently been a major push to integrate technology into our industry’s best practices and “going paperless” is an emerging trend. Nickle introduced Computer-Aided Design software to its business practices in 2007. The software enhanced productivity, improved time management, reduced waste, and assisted in providing the best quality work to our customers. Today we continue to use the software and have recently dabbled in CAD’s counterpart Building Information Modeling. This year Nickle hired its own CAD/BIM Tech Dale Graham who has received extensive software training. Two employees were also fortunate enough to have a guest column published in the November/December issue of the Delaware State Chamber of Commerce’s publication Delaware Business discussing the advantages of this technology and how it has helped Nickle improve its processes. 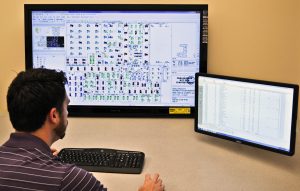 In order to promote internal communication and team-building, Nickle instituted a quarterly breakfast meeting this year. Every three months office employees from both the Newark and Georgetown location meet at a central location to connect during breakfast. During these meetings management takes the time to focus on various topics regarding the wellbeing of the company, announcements for the upcoming months, and address any questions or concerns employees may have. We also introduced a fun award called the “Top Dog,” which is given to an outstanding employee who is voted on by his or her colleagues. Our first meeting took place in July, the second in October, and we have plans in January for another.

In November, the company recognized some of its most dedicated employees – the Nickle Elite – who have been with the company for 10 or more years. Dedicating time and effort to one company for more than a decade is a major triumph. The economy and the workforce have had its ups and downs, but the Nickle Elite weathered the storms. This year there were 21 employees celebrating company anniversaries of 10+ years, five of which were welcomed into the Elite in 2013. 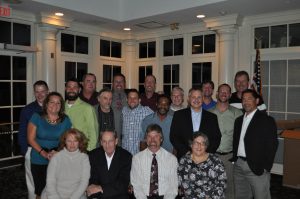 The annual ABC Excellence in Construction Awards event was a success for Nickle this year. We submitted two projects and attained two more honors. Nickle received an Excellence Award for a fit-out and renovation at Hosting.com, a web hosting company located in Newark that provides 24/7 assistance to more than 4,000 customers across the country. Nickle also received a Merit Award for a major remodel of Howard High School of Technology in Wilmington. This brings our total ABC Delaware Excellence Awards count to 28. 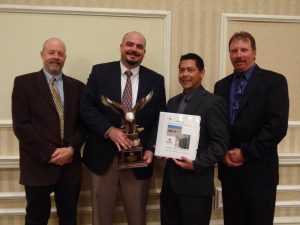 Throughout all of these major endeavors, we were still able to have fun – the Copper Crab Party, ABC Fall Fest & Chili Cookoff, Phillies Game, Electric Expo, DCA Crab Feast, and ABC Crab Feast – are a few of the many events Nickle employees attended. 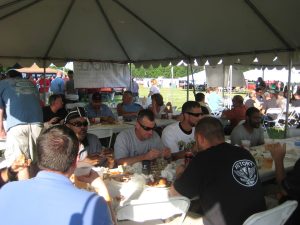 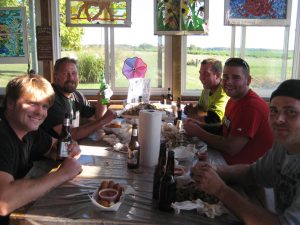 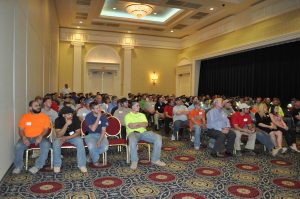 Some of Nickle’s most notable jobs that were featured in our newsletter’s project showcase this year included University of Delaware’s East Campus, Newark Charter, St. Francis LIFE Center, Dentsply, and our ABC Award Winners Hosting.com and Howard High School of Technology. 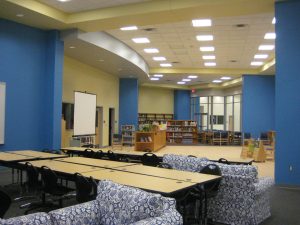 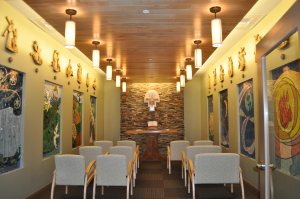 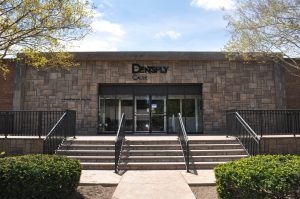 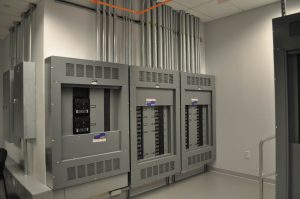 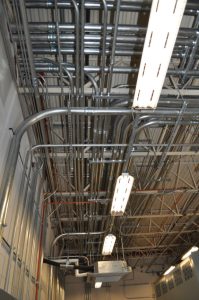 Thank you for continuing to read Nickle’s blog and support our company. We appreciate all of your assistance – we couldn’t have been this successful without you.

To read about Nickle News throughout the course of the year, you can sign up to receive our quarterly newsletter. Please e-mail ldignan@nickleelectrical.com to start receiving your copy of the Nickle News.